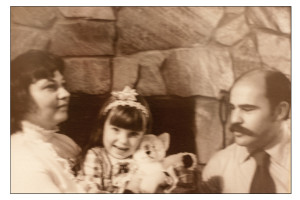 Nancy’s family in Anchorage in the 70s

The day before our trip we had a conversation with our friend of many years, Nancy, who lives in what I call “Far Redmond”.  I suppose it has another name among those who originally settled there, but it is well east of downtown Redmond, and you get the impression you are starting up into the foothills of the Cascade Range as you approach Nancy’s apartment.

Our friendship with Nancy spans many 30 years and many locations including Valdez and Anchorage in Alaska; Amman Jordan when Nancy’s husband Bill worked there about 1980, and finally, when Bill and Nancy retired to Montrose, CO. Nancy’s dear husband and master geologist, Bill, passed away in 2010, and Nancy moved to Redmond to be closer to her daughter who lives close by in Duvall.

At any rate it was decided Friday that it had been too long since we allowed ourselves the pleasure of some real quality time together, owing partially to some family needs, and partially to the time a journey requires from one side of Puget Sound to the other. So Nancy agreed to come over and spend some time with us.

We found a ferry leaving from Southworth at 9:15 am that would allow us to arrive at Nancy’s by our agreed upon time of 11:30 am. Weather was good and we arrived on time.

While discussing what cuisine would be right for lunch, and I mentioned Garlic Crush, a middle eastern casual place run by a Lebanese immagrant and former Microsoft employee in Bellevue, Nancy said “YES, I have not had that for a long time”, and Garlic Crush became our first stop.

I took a liking to Garlic Crush when Jennifer was working for Microsoft, not far from the restaurant. I love items on the menu here like hummus, baba ghannouji, falafel, shawarma and spanokapita. We shared all these things and some fine warm pita and life was good.

It is also worth noting that this is perhaps one of the real bargains in Bellevue, but don’t expect fancy table service. You place your order with the cashier and sit down with a number. The place is very popular for good reason.

After lunch we drove to W. Seattle for a little stroll around Alaska Junction (sometimes just called “The Junction”) with a dip into a favorite bakery, Bakery Nouveau, where we picked up some pastries for breakfast the next day and Nancy picked out a loaf of bread. Cursing our lack of time, Sunday Farmers Market was in session close by, we caught the Fauntleroy WSF ferry to Southworth about 4:20 pm and drove home around 5:15 pm to setup Nancy in the spare bed room for the weekend with us.

Jennifer had a prior arrangement for a dinner event with her sister-in-law, Karen, so that left Nancy and I on our own. As Nancy had no tour of Bremerton yet, we decided to go there for dinner. We arrived in time to go to my favorite lunch spot, the Salvadoran cafe called El Balcon, that I used on occasion while I was still doing IT for the Kitsap County Historical Society Museum which was just a half block away. I love this little hole-in-wall which only seats about 10 or 12, but plans to open a larger location by May. We had papusas and tamales plus their excellent salsa. All very good.

After supper we took a walk through the recently renewed downtown street area and Nancy, still a Coloradan at heart, enjoyed seeing the controversial fish/fisherman $250,000 sculpture that was created in Boulder Colorado. Next we stopped into Toro Lounge, almost across the street from El Balcon, for an after dinner drink and some of their excellent Papas Fritas, truffle fries served with curried ketchup. We chatted until it was time to pick up Jennifer at 9:00 pm back in Port Orchard. From there we drove home and all sat around the dining room table and talked until we just had to hit the pillows.

Started the day talking at home with Nancy. We brunched on Bakery Noveau pastries and fresh fruit before heading to the Dragonfly Cinema to watch Philomena, based on a true and very sad story about the Catholic mistreatment of young Irish women in the mid 20th century who had the misfortune of out of wedlock pregnancy. After we film we met with our movie friends, REEL Friends of Dragonfly Cinema, to discuss the film at the One Ten Lounge. The discussion was intense with most of the group moved by the story and finding a lot to say about it.  All three of us were glad to have seen this film.

We decided to go out to dinner with Nancy and were joined by two “REEL Friends”, Patte and Amelia. The consensus Port Orchard restaurant and universal favorite for us was Bay Street Bistro.  The intense conversation of One Ten Lounge continued but moved on to many other subjects than the ones of Philomena and was aided by some wine and the great food. I had the complete dinner offering which featured a halibut entrée that was so good I’d eat it once a week if I win the lottery. We were so into our conversation we probably pressed our time of departure a bit, but got the message, finally, that the staff needed to clean our corner of the bistro so they could go home. It was about 10:30 pm and I don’t think anybody wanted to go home, but we did.

After some coffee and a light breakfast we made the run up to Poulsbo to check out a new restaurant run by a chef that had previously run a decent gourmet spot called Mor-Mor for 10 years on the main street, which he recently closed to do something entirely different, a 50’s themed diner named Green Light Diner. I loved the Veggie scrambled eggs that Jennifer and I shared, but the biscuits were not made in the diner and were less than stellar. This is not the way to the heart of my lady! Of course we were spoiled in Anchorage by James of J-CAP Cafe where we often rode our bikes for brunch when the roads were dry. James was old school southern and his buttermilk biscuits were the best. I tried, but I could not talk him out of a recipe or any kind of instruction!

After lunch it was raining hard and besides that the aquarium was closed so there was no chance to visit the Great Pacific Octopus that usually resides a half block away at Poulsbo Marine Science Center. So we jumped back in the Subaru and headed for the Suquamish Museum, a favorite place of mine, and for the generously low senior price of $3 each we had a chance to immerse ourselves in the story of those who have been here the longest–the Suquamish people.

Then we buzzed down to Winslow on Bainbridge Island and caught the WSF ferry to Seattle. The sun came out for us in Suquamish and stayed out for awhile making this a nice run.

After arriving in Seattle about 3:30 pm we headed straight for Redmond hoping to avoid the ugly traffic that piles up quickly about this time of the day. Our Subaru that we call “Moon Unit” had other ideas. Before we could clear Bellevue we noticed that the brake light would not go out and the charging light indicated the battery was in trouble. We stopped at the Chaplin’s Bellevue Subaru where it was quickly diagnosed as a bad alternator. Our luck was in high gear of the good kind, as the part was in stock and there a tech available who could give us prompt service. We left about 4:45 pm in the midst of the big traffic jams but let our GPS guide us through back streets out to Nancy’s place in Redmond arriving around 5:30 pm.

Putting a great cap on our wonderful visit we stopped at one of Nancy’s favorite restaurants within walking distance from her apartment, the Silver Spoon Thai Restaurant. The ladies had a large selection of appetizers, and I ordered the spring rolls, the best I can remember, and a mildly spiced Thai soup, Tom Jurd with bean curd and shrimp, which I loved.

Sadly, we dropped off Nancy after dinner at her apartment and made the run back to the ferries. We found a good match to our driving time at the Seattle docks, a ferry leaving at 7:55 pm and got home via Bremerton in good shape about 9:30 pm.

Bottom line, we had a million laughs and few tears and we had the time and closeness to really renew our three way friendship.  We vowed to do this again soon.

2 thoughts on “Great Weekend with Nancy & A Road Trip”