One more Harvest Holiday is in the past. This time with no turkey at all. Not missed, I would always favor a good salmon over a turkey.  Because of friends who we couldn’t connect with and bad weather making us want to stay off the roads, we had our feast at home this year.

Jennifer and I share enough food loves to do well together, but there are divergences. Tonight it was good for both of us, nothing was too spicy for Jennifer, and I got something mostly about me on the table, collard greens. Liked the way the day’s feast was about both of us and the life we’ve led. Wild salmon from Alaska—we met there and I took Jennifer fishing once and she caught a bunch of salmon, her first such experience. On that trip we were staying in a forest service cabin on Hinchinbrook Island, sharing the island paths with some big brown bears.

Jennifer’s Mom and Dad loved oysters, mine not so much, but Dad would occasionally lobby for oyster stew, which involved some oysters from cans. I did become enjoy sharing a bowl of the that stew, when it was available. Jennifer’s Dad owned an oyster knife and used it.

By the time we had been together for a while we often sought raw oysters on the half shell, and for a long time oyster dressing has been essential for the Day of the Tu

When we visited Jennifer’s cousins and nephew and nieces in New Orleans, the food included oysters, po’ boys, I think. The dressing and collard greens are in a way a nod to that visit and some other southern trips we have both experienced. The wildest was Lee & Ricks in Orlando, a rough place that was pretty much nothing but buckets of fresh oysters and saltine crackers 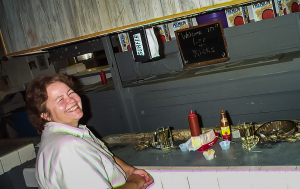 These two photos were taken October 16th 2000 in Lee & Rick’s Oyster House in Orlando FL. Above is our counterman shucking out of our bucket of oysters, $5 a bucket. To the left, Jennifer, I think, is showing her appreciation for the experience.

Roasted Garlic, as an appetizer, but we didn’t really have time for it, so aside for me nibbling a couple cloves, it will be for the leftover meals to follow..

Baked Oyster Dressing from a recipe of Emeril Lagasse as published online. A good version, and the mixed vegetables in it remind me of the Cajun cooking of New Orleans. Jay Ducote on Huffington Post speaks about the base for this dressing this way, “a medley of vegetables based on the French mirepoix. ‘The holy trinity of Cajun cuisine’ utilizes onion, celery, and bell pepper (rather than carrots) to provide a flavor base for many dishes.”

Butternut Squash mashed with Pineapple and baked with a toasted coconut and walnut topping, made a bit sweet with some organic sugar and honey.

Sweet Corn on the Cob, simply steamed with a little sea salt and brushed with melted butter before serving. I was very unsure of including this but my local grocer had it from Mexico and it looked good, and it was sweet and tasty.

Collard Greens with onion and bacon. This one was mainly for me. The summer after my freshman college year found me working in southern Alabama and living in boarding houses. Although, considered more soul food than white southern food, I’ve long enjoyed it. Jennifer and I found a BBQ joint in Buffalo run by a white Kentuckian we visited often–collards were always available on their menu.